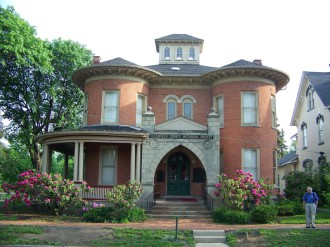 The Clearfield County Historical Museum and Headquarters as it appears today resting serenley along the West Branch of the Susquehanna in downtown Clearfield, Pa.

Names prominent in the county's history--- Reed, Bigler, Kerr--- owned the land on which the building is located or lived in the stately structure that provides one of our county's strongest links between the past and the present. The building itself is typical of the architecture of the mid-Victorian period of the late 1870's and 1880's --- a brick country mansion of enormous box shape, having ornamental horizontal molding located near the top and crowned with a light tower or cupola. The land on which the museum building is located at East Pine Street and North Front Street was originally part of a larger tract owned by A. B. Reed, a descendant of one of the early settlers of the county and, judging by his writings that are still available, a man interested in the history of Clearfield.

Mr. Reed conveyed the land on April 15, 1852, to William Bigler (County Deed Book "A", Page 137). Mr. Bigler, who was Governor of Pennsylvania at the time and later served in the United States Senate, apparently did nothing with land and with his wife on October 25, 1878, conveyed the property for $1,250 to George S. Young (County Deed Book 11, Page 408), a native of Meyersdale, Somerset County.

Assessment records show that in 1880, Mr. Young, a machinist, was assessed for the first time with a house on the lot, indicating that the house was built on the lot by Mr. Young somewhere between 1879 and 1880. Indications, too, are that this is the same house now used as the museum, except that some exterior changes were made in later years.

It was during the lifetime of James Kerr that guests in the house included business and political leaders from far beyond the bounds of Clearfield County. It was, until 1926, the Kerr home to Clearfielders.

Mr. Kerr had spent his first eight years in the county working in and about mines, in farming and as a clerk in a store in Clearfield. Eventually, he formed an insurance firm known as Kerr, Biddle & Helmbold. By the turn of the century he had become one of the ablest and best informed men in the bituminous coal trade as a partner of Peale, Peacock & Kerr and in 1900-02 was a leading figure in the establishment and construction of the Beech Creek Railroad's "River Line" from Clearfield to Karthaus, which today is still a mail rail outlet for Clearfield County.

Mr. Kerr's political career started with his election as a Justice of the Peace in 1878, followed by a six-year term beginning in 1880 as County Prothonotary. He was elected to the 51st Congress (1889-1891) by a large majority and then was twice elected to two-year terms as Chief Clerk of the House of Representatives at Washington, the only Clearfield countian to serve in that position.

It was during his residence in Washington as Congressman and House Clerk that the Kerr family became friends with William Jennings Bryan, the famous Democratic leader and several time candidate for the presidency. This friendship was renewed at the 1896 Chicago convention at which Bryan was nominated for the presidency and the result was a promise by Mr. Bryan to visit the Kerr home at Clearfield.

The visit came about October 22, 1898, some months after Mr. Bryan had written Mr. Kerr, "I repeat the promise made several times that I shall come to Clearfield. My Plan now is to stop on my return home after the Washington banquet... Had hoped to be there earlier, but have been detained by other engagements."

Originally, Mr. Bryan was scheduled to visit the Kerr home Thursday, Oct. 21, and the following day, but according to the Clearfield Republican (A Democratic newspaper despite it name), Mr. Kerr found "that the Republicans had billed Mr. (John) Wanamaker for the date in the capitol of Clearfield County. Not wishing to interfere with the plans of a man who is trying to show up the corruption of the Republican bosses in state offices as Mr. Bryan is trying to educate the people on the corruption of the national Republican bosses, Mr. Kerr called up the Democrats of Philipsburg and told them they could have Mr. Bryan speak there if they desired."

Philipsburg Democrats were only too happy to have Mr. Bryan visit them, according to the Republican "and the reception tendered him in that old town was the greatest in it history." Mr Bryan and his party, including Mr. Kerr, arrived by special train on the Beech Creek and its great orator talked in the opera house and in the street, the Republican reported.

Apparently, The Bryan party remained in Philipsburg Thursday night, possibly aboard the special train, for the Republican reported that "when the train arrived in Clearfield Friday morning... from the station to Mr. Kerr's residence was a perfect ovation, the people running alongside the carriage and cheering him until he disappeared. This (Friday) morning long before the time for the wage-earner to take up his toil and the businessman to take up his cares, the people from all parts of the county commence to arrive in all kinds of conveyances... By 9 o'clock at least 5,000 strangers were on the streets waiting to see and hear William Jennings Bryan."

"The Opera House had been secured, but it would not hold one tenth of the people. When the reception committee, headed by the band, went down to Mr. Kerr's, it was announced that Mr. Bryan would first speak from the Courthouse steps then the Opera House." (The Clearfield reception committee appointed by County Chairman Hagerty was composed of Hon. D. L. Krebs, J. F. Snyder, S. V. Wilson, A. O. Smith, George M. Bigler, D. R. Fullerton, A.W. Lee, J. P. Burchfield, D. J. Gingery, J. A. Murray and Bine Koozer.) 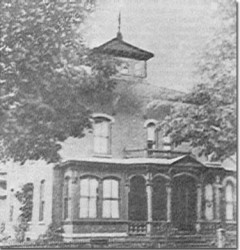 This picture shows the original Young-Kerr home. Note that the porch extends only a short distance on each side of the entranceway. This picture apparently was taken in the early 1880's before Mr. Kerr added the present round turret-like sections at the two corners facing on Pine Street and extended the porch.

Following his speeches, the Republican reported, Mr. Bryan and other guests were served a light lunch at the Kerr residence and "at the conclusion Mr. Bryan and Mr . Kerr were driven to the Mahoning (railroad) station to take the train for Franklin."

A legend of more than 70 years has recounted the Mr. Bryan spoke from the porch of the Kerr home. The foregoing report from the Republican indicates that he did not, other than possibly a few remarks when the reception committee arrived to escort him to the Courthouse steps and the Opera House for his speeches. He was a guest for lunch at the home.

James Kerr died October 30, 1908, and on March 12, 1926 his widow deeded the property to the late P. T. Davis (Deed Book 277, Page 532). Mr Davis was Chief Clerk for two boards of County Commissioners from 1897 to 1902 and later achieved prominence as a director and president of the Clearfield Bank and Trust Company.

During Mr. Kerr's residency, the exterior of the house was embellished with the two turret-like additions to its front on Pine Street, the erection of the stone arch entranceway and the extension of the porch along the side facing the river. Also built was the carriage house at the rear of the triangular shaped lot and an elaborate "outhouse" attached to the rear of the house facing the river.

Mrs. Harold J. Boulton, the former Julia Boardman Kerr whose father was Brig. General Frederick B. Kerr, son of James Kerr, was born with a twin sister in the Kerr house and lived there for many years. Somewhat humorously, Mrs. Boulton remembers the "outhouse" as a "three-holer" that was notable for having a stream of water running through it and emptying into the river.

William T. Davis also remembers the outhouse with running water and recalls that his father had the segment of house torn down shortly after purchasing it in 1926. There is evidence in the brick masonry today of a door having once connected the outhouse with the main building.

Mrs. Boulton remembers that the carriage house was originally used as a stable for two or three horses. "One was named Prince," she recalls "and we had a carriage complete with lamps on the side plus a sleigh."

A black couple by the name of Emmett and Ellen Burhannon served as caretakers and cook at the Kerr home at the time and lived on the second floor of the carriage house, Mrs. Boulton says.

In the intervening years since the Kerr residency, the general appearance of the house has remained unchanged for the most part, other that the removal of the outhouse.

During 1976-77, the Historical Society had the old wooden flooring and railings of the porch removed and replaced by a concrete deck and wrought iron railing as part of a renovation program that included repointing the brick facing, repair of the stone masonry, caulking and repainting the exterior woodwork, including the cupola. The renovation work was undertaken by contributions of county business firms and individuals interested in preserving this bridge across the years to a life and time in the community over nine decades ago.

This History Published, 1978, By the Clearfield County Historical Society.

...click to join as a member of this Historical Society!