Clearfield County was formed from parts of Lycoming and Huntington counties and was organized by Act of Assembly, March 26, 1804 and approved by Governor McKean, the Governor of the Commonwealth. The area was then known as Chincleclamousche Township. For several years the county was only partially organized. In 1812 the assembly passed a law organizing the County and authorizing its citizens to elect officials. The first political subdivision was made in 1807 when it was divided into Beccaria, Bradford and Chincleclamousche Townships. The last townships to be formed were Bigler in 1883 and Cooper in 1884. The first borough incorporated was Clearfield in 1840 and the last was Westover in 1895.

Clearfield was chosen as the county seat on May 20, 1805. The first Courthouse was built in 1814 on the present site, which was donated by Abraham Witmer. The present Courthouse was completed 1862 and an addition in 1882. Mr. Witmer also donated three lots for an academy, one lot for a market and one lot for a jail. The present County Jail was built and dedicated in May 1981 replacing the original structure built in 1872. The Clearfield County Home in Lawrence Township was replaced in 1965 with a modern facility. The original County Home was converted into a Multi-Service Center which houses County, State and Federal offices.

The first election of County officers was held in October 1812 with Hugh Jordan, Samuel Fulton and Robert Maxwell being elected the First County Commisioners. The first session of court in the County was held October 21, 1822, by Honorable Francis W. Rawle and Moses Boggs, being judges for the first day. The first school seems to have been in 1804 where the McClure Cemetery is now located, just southwest of Curwensville. This also seems to have been the first church building built by Presbyterians, but the Friends of Penn Township met in "Grampian Hills" in 1811. The Friends built a log meeting house in 1842 where Friends Cemetery is now located near Grampian.

The history of the white man in the County dates from about 1783 when Captain Edward Ricketts settled in the area of what is now Bigler Township. Most of the land within the County was surveyed and divided into large tracts of from 250 to 1,000 acres, known as warrants, of which a large part was given to the soldiers of the Pennsylvania Line for their services in the Revolutionary War. Other large tracts were owned by investors from England and the larger cities in the East.

The name Clearfield is believed to have been taken from the cleared fields, which the settlers found in the area. 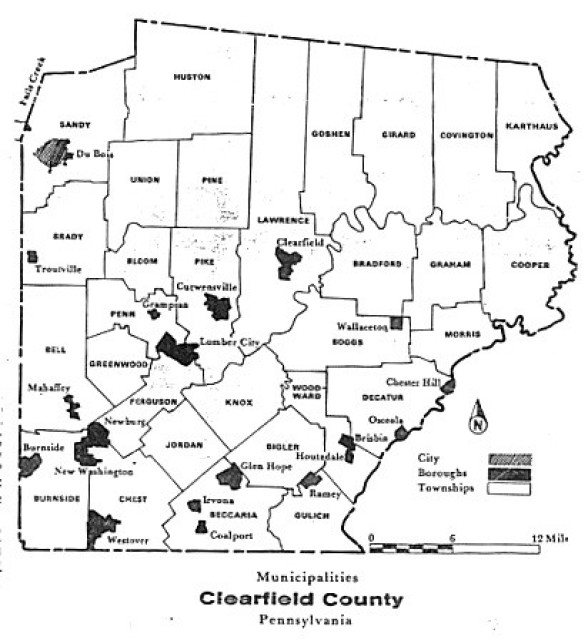 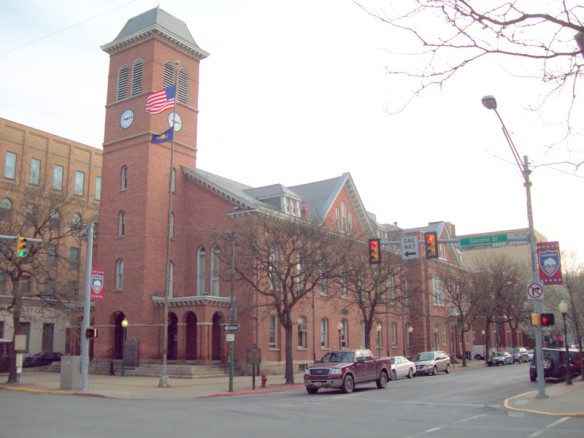